The roundtable brought together members of the MSME informal working group at the WTO in Geneva on 18 January 2019. The meeting opened with an overview presentation about TAF2+ by Tom Pengelly, Strategy & Results Director of the TAF2+ Fund Management team. This covered the structure of the fund and the types of support provided to developing countries in trade and investment negotiations. The presentation then moved on to introducing the planned TAF 2+ Umbrella Grant, outlining its chief objectives as well as the menu of outputs for supporting developing countries in some of the post-WTO MC11 work programmes (E-commerce, MSMEs and Investment Facilitation). The session also brought attention to the overlaps between the MSMEs agenda and the Buenos Aires declaration on women and trade, highlighting the need for national-level work to incorporate the gender dimension.

The discussion then opened up to questions and interventions from the floor, and participants took the opportunity to share their priorities and perspectives. The importance of getting capitals involved on the MSME agenda in Geneva was underscored, addressing the disconnect in the approach to MSMEs which are traditionally analysed from a domestic policy perspective. In addition, participants highlighted the need to listen to the private sector and enrich the conversation with inputs from MSMEs themselves.

The session closed with consideration of how TAF2+ can plug into the work ahead in the context of the informal working group on MSMEs, supporting members on the road to recommendations in the run-up to the 12th WTO Ministerial Conference in June 2020. As the next steps, TAF2+ will sponsor a one- day advisory event on the MSME agenda in the WTO with the aim of engaging a larger contingent of the WTO membership and continue work for launching the Umbrella Grant in April 2019. 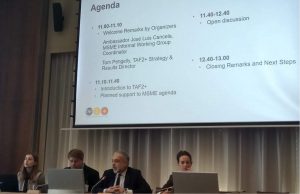